Lost in the Woods

That's my excuse for not posting.  I left a trail of breadcrumbs, but when I turned around to look at my cat winking at me from the window (it's just the moon silly Gretel..) I found that hungry birds had devoured my trail back to this blog.  Also the light has been awful.  Minnesota bloggers everywhere embrace this truth.

So I got a new camera, and the first sad lesson I learned was that my favorite time of day, in my favorite spot for pictures (on my porch, late morning on my way to work) was too bright for my camera's abilities.  Or just yesterday was.  Do you doubt me?


So although I haven't been blogging, or taking photos- I have been sewing and will try to document some new garments for you to make up for time lost in the woods.  My first garment is one that took way more thought than you might think.  We got some adorable David Walker fabric in at Sewtropolis, and it had just enough of a sophisticated palette that I decided that I, a 43 yr old woman, needed a garment with bears on it.  Bears and squirrels.  The result was this little tiered self-drafted number.

It's just rectangles, stacked and gathered.  For fun, I gathered the top and bottom of both tiers on some of the narrower ones, for a ruched effect.  I had to make it longer than I originally planned because it was a virtual tutu, in a classic Cyndi Lauper way which seemed a bit too young for me.  The added tiers/length fixed that.  I admit, I got pretty quilty with it, but it was a case of knowing it was going to get Becky Home-Ecky from the get-go.  I decided to embrace that and go with more is more- 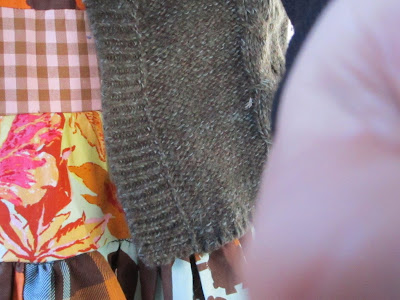 It's a credo that extends to how I style it too, since this heathered sweater works well with it, as does another top that is ruffled tiers with a ditsy calicoish floral.  Obviously this is a boxier silhuoette than what is optimum for me, but I still like the layers, even if they do make me look thicker.  Winter in Minnesota, go figure. 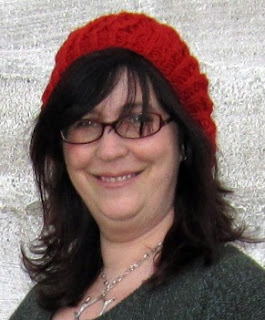 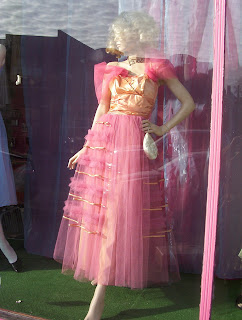 I live a block away from this vintage shop, Via's Vintage and I love seeing their new window displays go up.  The other morning I was all agog over this little number.  I'm not sure what about it has captivated me so, but I had to go back and photo it yesterday to share. 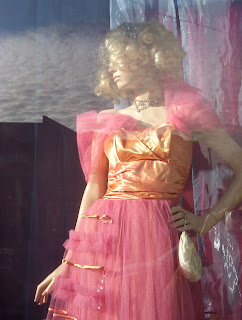 On a certain level, it's too much with the palette of orange and strawberry sherbet..certainly the tulle sleeve/wrap has aged awfully, to the point one can only imagine how it hugged the shoulders when it was new and spandy.. Clearly this isn't made of fine fabric, it's definitely all nylon tulle just waiting to eventually fall to pieces.. 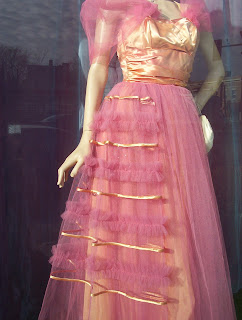 When you get down to the details, which accentuate the "you look like a beautiful blonde pineapple" effect of the dress (bonus points to people who can identify the quote!).  Although the gathered ruffles of tulle are too much for the elegance I believe this dress is trying to achieve, the effect of the bands of satin trim on the tulle is lovely.  Upon closer inspection, they must have been handsewn with a zigzag stitch. 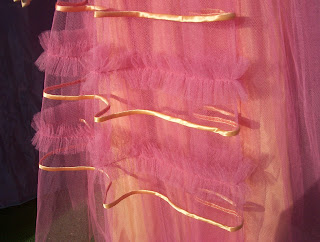 I guess the minutia of almost anything can sometimes take your breath away..  I'm still not sure whether I think this dress is fabulous or truly awful, but I kind of love it like sherbet balls melting into 7up punch...
Posted by Laura (lap) at 5:37 AM 3 comments:


Lavender at threadsquare was lovely enough to tag me with a Versatile Blogger award. Thank you Lavender!  Apparently the rules are as follows:

1.) I like to wear cotton kerchiefs in my hair (made by me of course!) if I want to hold my bangs back, because scarves are too silky and slip right out.  My ex used to say when I wore them I looked like a schmatte, so I began to call them that since "schmatte" actually means a "ragged garment" or "any garment" rather than someone who works in the garment district.  I named the blog "schmatte" because of this lyric from "Shattered" by the Rolling Stones-

2.) My first sewing project was a yoked nightgown that we had to make in flannel.  I took a class with other girls in my 8th grade class at the high school I was thinking of attending.  I did not finish the nightgown, but I did end up going to the high school.  I didn't really start sewing until I was 20, and I did so voraciously.


4.) I've been a blogger since July of 2003 when we called them online journals.  I started because I had given a baby up in a direct placement adoption and felt weird not talking about it.  My first blog "Bad Luck on Tap" was at diaryland, and can be still be perused by interested parties.

5.) I moved at least once a year from the time I was born until I was 6.  That year I asked "Daddy, can we live here another year?  The trick or treating is SO GOOD!"  During a brief follow up interview it was revealed to my father that I remembered my birthdays by the color our house was that year.  I am happy to report we lived in that neighborhood (Ham Lake, MN)  for 4 years before moving to glorious South Minneapolis when I was 10.  I've lived in the Twin Cities ever since.

6.)I used to manage a comic book store, The College of Comic Book Knowledge from 1989-2004.  In later years I wasn't the manager anymore, but the assistant to one of the owners.  I still love comics, but I'm too poor to buy them weekly and I usually check them out from the excellent Hennepin County library system.  If you haven't ever read a comic (or graphic novel), you really should.  I recommend Love & Rockets, Ghost World or this quite highly.

7.)Orange has been my favorite color since I was at least 6.  I asked for my room to be painted orange, and got walls the color of baby aspirin instead.  The room was, however, carpeted in awesome bright orange sculptured shag.  Later my walls were painted bright yellow which I loved.


Thanks again to Lavender at threadsquare for the tag!

I finally used this fabric as the centerpiece of a garment.  I used it as the hem band on my favorite summer dress, Serendipity Studio's Claire Cami  and continued to obsess about it and love the colors for Fall.  Because they go with my Fall Palette, I decided I must use it again.  So I FINALLY made Colette Pattern's Ginger skirt!

I went with version one, and really loved sewing the pattern.  It's super straightforward, and was very easy to fit and make additional design choices on.  I felt like my busy print didn't show off the pointed waistband enough so I added some contrasting topstitching to help outline it. 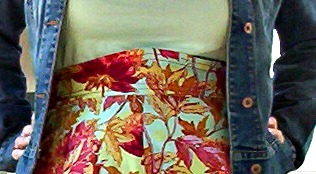 I will say that I find the wide waistband very flattering, but feel that because of the extreme difference between my hip and waist measurement  (it goes from 49 to 38 in less than a 6" rise..) I wished for a way to "snug up" the waistband so it doesn't feel gapey.  I don't believe it looks as if it gapey, but there's room there..  and I recently did faux shirring effect on a yet-to-be photoed project that should do the snuggy trick.  The shirred effect is created using wide sport elastic and the same technique Peter describes during his Boxer Sew-Along, only I do this only on the back waistband.  I did this on a 3" wide waistband, and am excited to try it again with another of the Ginger pattern's fancy waistbands, view 2.  I may even venture waaay out of the box for me and make this in A SOLID WOOL.  I pause as you all gasp of course, but I don't know how else I can rationalize adding any more skirts to my Fall Palette Challenge.  I have some lovely double-faced wool to choose from in plum, peacock, or a coral I'd like to say is akin to sunburn.  If I use the peacock blue it will go with the Winter palette of jewel tones I'm already fantasizing about...

In conclusion I love the a-line of Ginger, and this colorway goes with so many of my favorite sweaters and tops that it soothes me over my sadness over putting away my favorite summer dress for the season.  It looks great with my favorite Campus boots as well as the manly brogues pictured here.  A wardrobe staple worthy of every season!
Posted by Laura (lap) at 6:25 AM 1 comment:

Now truth be told, this adorable Tina Givens print (Gossip Tree from her Treetop Fancy line) was supposed to be a full circle skirt with 4 gores. The way the one way directional repeat worked in this print, I felt like it would be maximized by centering the gores on the directional (ironically, this attention to direction was paid immediately after cutting out my "Everyone Makes Mistakes" skirt, but before said mistake was discovered.)

Unfortunately, I cut out my last gore overlapping where I cut out the waist on my third gore, making it appear to have a butchered scalloped edge.  So it became a three-gore 3/4 circle skirt.  So it goes. 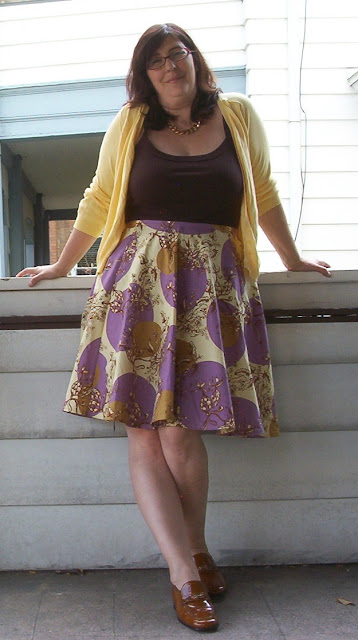 Honestly I love the way it hangs.  I finished the waist with bias tape cut from the same fabric and used an invisible zipper in center back following the great tutorial on the Coletterie.  I absolutely love how a shirt looks tucked into this non-waistband finish.  I have been so in love with belts and wide waistbands lately, I was surprised at how flattering this looks. 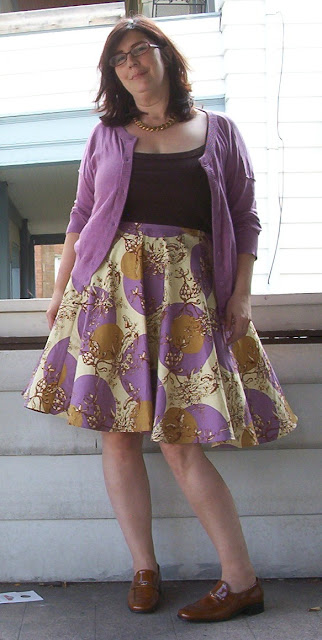 I finished with a simple rolled hem pressed 1/4", and then rolled another 1/4" and sewn once. My skirt is still plenty swingy as you can see.

So in recap here are the 3 circle skirts in my Fall Palette Wardrobe...


Who can pick?  I love the economical use of fabric in a half-circle, but that extra quarter step to a 3/4s is so lovely in the draping.  It occurs to me that the soft fluid drape of the plaid suiting in my full circle is far less dramatic than the results with the stiffer fabric cut into gores with the 3/4s.  No matter I love them all.

I made a half-circle skirt with a black knit elastic waistband- so easy and so flattering.  I lazily did a serged rolled hem too, making it a super fast project - less than one hour, if you don't count the time it took to hang it before hemming.  But maybe I should have made it more thoughtfully.  Perhaps you can find my mistake... 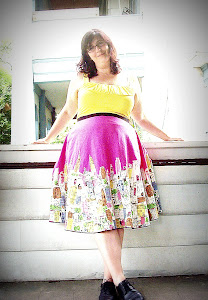 I've been sewing voraciously since I was 20. Initially I was self-taught, learning most of what I knew from following patterns, and then at 27 I went to the Apparel Design and Manufacturing program at Minneapolis Community and Technical College. Once I left school and was working I found less time to design and sew (and clean up after sewing) so I'm just starting to renew my passion.

mommylap is an online persona based on my initials "lap" and the ever-pervading role of my life. It became the name of my fashion line in school since my target customer was active & pregnant mothers. Sometimes I think mommylap is my superhero persona, and lap is my secret identity, but more than anything mommylap is the brand I sell myself with. Hopefully it's considered quality merchandise... 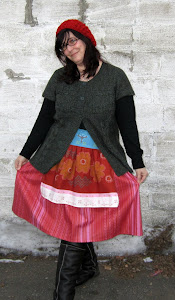